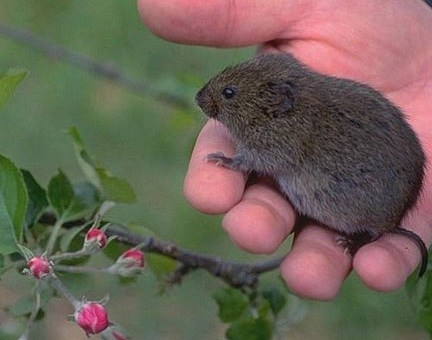 OK I’m stopping here for a second because I think that overrunning looks really weird with those double r’s and double n’s.  I think maybe it should be over-running…

I just checked online.  Nowhere did I see any support for using over-running instead of overrunning.  But now I’m starting to wonder whether I should stick with online or maybe use “on line” or maybe even “on-line”…

I’m back. I went online again to resolve this new issue.  Lo and behold I’m not the first person to have wondered about online and its variants. It turns out that online is OK.

But where was I?  Oh yeah, vole-induced distraction.

The first thing you need to know about voles (aka Field Mice) is that they’re quite cute and mysterious.  That’s obvious from the picture of that vole floating mysteriously in midair on a disembodied hand (see above).  But the damage voles can do to your lawn is NOT cute. Left to themselves, voles can effortlessly create networks of dead grass “runs.”  Well maybe not effortlessly.  There’s a bit of chewing involved.

The second thing to know about voles is that they aren’t mice.  Voles have shorter tails, smaller ears and blunter snouts relative to mice.  They’re compacted, almost as if they’re traveling  at or close to the speed of light.  But although I said voles are mysterious, they aren’t THAT mysterious.

(Editor’s Note:  Einstein figured out that a yardstick or a vole zipping past you at light speed will look shorter.  UNLESS you too happen to be moving at light speed.  More on that later.)

I dunno.  The two animals pictured below look like they’re about the same size.  It does look like the vole had part of its tail airbrushed away to make it (the tail) look shorter but I could be wrong.  Anyway, who would do that?

And I resisted the impulse to go online to see whether airbrushed should actually be air-brushed, just so you know…

Hah!  Caught you didn’t I?  You just went online and found out that there aren’t any sites addressing this issue, didn’t you?  I could have told you that.  But wait a minute!  Let’s think this through.  You’re already online!  Otherwise you wouldn’t be reading this column!  What was I thinking?

Clearly, I’m distracted and also a victim of my own logic, because here I am online too, typing stuff like: “I went back online to resolve this new issue.”

Anyway, the third thing about voles is this: certain breeds of dogs, such as Border Collie-Lab crosses, will gobble up dead voles with relish (and maybe mustard).  One dog in particular, whom I’ll call “Mickey” for the sake of argument,  has been having a field (!) day this summer snacking on the voles that have succumbed to the feral cats in our neighborhood, including one I’ll call “Zoe” for the sake of argument.  More on that some other time.

The last thing I think you should know about voles is that the damage they cause is often blamed on moles, so let’s clear this up right now.  Moles leave ridges in your lawn, not bare strips.  The moles HATE taking shade on account of voles.  They have enough problems of their own such as bad eyesight.  They also spend a fortune on nail care.

I think I need to regroup at this point.  What I really wanted to talk about today is the potentially sub-optimal practice of walking while texting.  The Employee Health and Safety division of the company I work for, which I’ll call “LifeLabs” for the sake of argument, just issued a whole blurb about this topic, under the heading “The Walking Distracted.”

The following picture illustrates some of the hazards associated with walking-whilst-texting including missing your cab, dialing a wrong number, failing to notice a weird black oval on the sidewalk which incidentally looks nothing like a manhole, having half your head sliced off by a green thing sporting a suspicious bulge, and wasting data by texting your friend who is only two feet away from you.

But this got me to thinking about all the other potentially sub-optimal scenarios arising from texting, such as:

Distracted Philospher: “I drank what?” 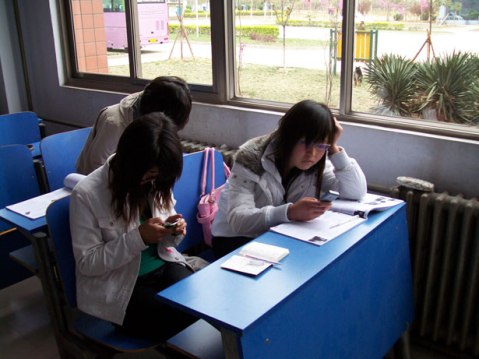 Symptoms of Texting While Sitting in English Class:

-improper USE Of capitalS

Well, that’s about it for now.  The voles are beckoning me with their tiny, mysterious paws.

But one last thing: should that have been “deadlines” or “dead-lines” a few lines back?  You could always go online and check.

Next Column:  The Eclipse, Relativity And Maybe Some Octopus-Related Anecdotes

One thought on “Man vs Voles”