But before I go any farther I want to say for the record that the only reason I watched all 220 episodes of Smallville was to humor a small boy who I’ll call Andrew (not his real name).  Remember, when you’re talking about distance, use farther; when you not talking about distance, use further. Remember also that you use whom when there’s a preposition involved, such as in this sentence: ”Whom shall I give this last piece of  piecaken to?”  And when there’s no preposition involved, use who.

Anyway, “Andrew” and I watched Smallville, which everyone knows is the story of Clark Kent (not his real name) growing up in Smallville, after he plummeted to Earth in an escape pod.  His parents Jor-El and Lara put the baby Kal-El in the escape pod because the star around which their home planet Krypton orbited was about to go nova.  When Kal-El got to Earth he did a lot of stuff including getting a new name and getting an “A” in welding shop.

He also lifted tractors, rescued Lana Lang and Lois Lane and made it to school on time even when his alarm clock was set for 8:59 AM.  (School started at 9:00 AM in Smallville.)

When he wasn’t busy rescuing Lana Lang and Lois Lane, navigating his troubled relationship with his friend Lex Luthor (What’s with the LL’s anyway?), meeting his cousin Kara Zor-El aka Supergirl, and battling people from other dimensions, he would often retreat to his Fortress of Solitude and Teen Angst. (FOSATA for short.)

Now we normal teens had to make do with the bathroom, but Clark was fortunate enough to be able to retreat to his nifty hangout located somewhere above the Arctic Circle, when things got too intense between him and his adoptive parents Martha and Jonathan Kent.  (Oddly enough, Jonathan Kent looked eerily like a guy I know named Darr-Ell Jones, but that’s another story.)

We never did find out whether the FOSATA had a bathroom, but what it did have was a veritable forest of these Memory Crystals, which contained all the accumulated wisdom of Krypton, plus holograms of Jor-el and Lara, plus a complete list of all 93 weird forms of Kryptonite Clark would eventually encounter, plus his Kryptonian Social Security number.

So these Kryptonian crystals, no doubt, were the inspiration for researchers at the University of Southampton Optical Research Centre (USORC for short), conveniently located in Southampton, England, to develop Earth versions.  They devised a way to encode huge amounts of information in ultrapure, glassy silicon wafers, which have been touted to last “until the Sun burns out”.  Remember that if I was talking about suns in particular no capitalization is required, but since I am talking about our sun, I use Sun.  Just like if I were talking about the upcoming election for President of the United States (POTUS for short) I would say the Presidential Election, not presidential election. But I digress.

Now as we all know, data storage here on Earth, is an ongoing problem.  Magnetized tape (cassettes, videotape, etc) only lasts about 50 years.  Data stored on chips fares better but is still prone to corruption by radiation, alien electromagnetic pulses (EMPs for short) and high temperatures.

“Dang, I accidentally left it in the oven to keep it safe from alien EMPs.  Bye-bye all six seasons of Downton Abbey.”

But glass lasts a long time, even longer than Styrofoam, but even Styrofoam isn’t going to last billions of years, which is why the USORC scientists focused on etching trillions of bits in the depths of ultrapure, glassy silicon wafers, using a femtosecond laser.

In the words of ORC professor (not an orc) Peter Kalansky: “It is thrilling to think that we have created the technology to preserve documents and information (editor’s note: aren’t documents information?) and store it in space for future generations.  This technology can secure the last evidence of our civilization, including the 2016 Presidential debates, and all we’ve learnt will not be forgotten.  Plus, we’re really into femtosecond lasers.”

(A femtosecond laser emits really short pulses, a lot shorter than the time it takes “Andrew” (mentioned earlier) to pick up his socks after he’s been asked 200 times. )

The technology hasn’t been commercialized yet, but so far the researchers have preserved noble documents including the King James Bible, the Magna Carta, Isaac Newton’s “Opticks” treatise (about optics, oddly enough) and all six seasons of Downton Abbey. 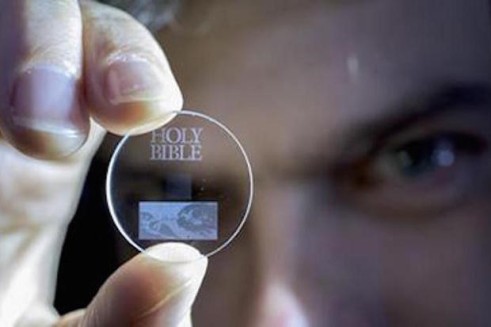 So all this immediately got me putting together a list of things I want to see preserved in these wafers:

Meanwhile, I’m going to drink a cocktail, spark up my Dyson, vacuum up some fluff and then I might re-watch Smallville: Episode 220. You know, it’s the one where Clark finally gets his pilot’s license…plus a hefty fine from the Federal Aviation Administration. (FAA for short)

Next column: When to spell out a number, and when to just use the number itself.