Here in Calgary it’s June, as is the case in many other parts of North America.  Calgary gets most of its rain in May and June, and consequently these are the months when I confront my annual issue, which is:  wet fur.  My dog Mickey has long fur and every time we go out in the rain, it gets wet.  No surprise there.  But it takes awhile to towel him off when we come back. Time is a precious commodity, so every June I always have to revisit my whole approach to wet dogs in general, and Mickey in particular.

From where Mickey sits, the toweling-off ritual is a great thing, because I take the towel in both hands and quickly swaddle his head in it so he can’t see anything.  (Except towel.)  He pretends to get all ferocious and will chew on the towel, growl at it menacingly and occasionally start barking enthusiastically until my wife says: “What the heck are you doing to that dog?  Whatever it is, cut it out!”

I guess I could just stop getting him all worked up when I dry him off, but he really likes the routine: it’s the highlight of my day.  Oops!  I meant his day.

I’ve been down the raincoat and booties road as well.  Mickey doesn’t mind it and the cats are OK with it too.  One or maybe both of them (the cats) will usually come to inspect the proceedings before we set off.

But truth be told, it takes as long to get Mickey dressed in foul weather gear as it does to towel him off if he goes out au natural.  So realistically I only have a few options for dealing with this wet fur conundrum:

2) Trade Mickey for a dog with shorter, water-repellent fur.

3) Trade Mickey for a completely different species of animal.

Right away Scotchgard™ is off the table.  Everyone knows that it contains perfluorobutanesulfonic acid (PFBS).  Thank goodness the half-life of PFBS is just a little over a month.  Until 2003, Scotchgard™ contained perfluorooctanesulfonate (PFOS) which has a half-life of 5.4 years.  So you only grow one extra eye with chronic PFBS exposure whereas with PFOS on board you will for sure grow an extra eye, plus a tail.  Last time I checked, Mickey had a full complement of eyes, and a tail.  So no PFBS for him.  Or PFOS for that matter.

Options 2 and 3 are not up for discussion either. I would never, ever give Mickey away, and this is why:

When we’re out walking, we occasionally encounter a three-year-old, so we stop to visit.  Three-year-olds are great because they will believe almost everything you tell them.  So I gravely tell them that at any given time there can only be seven Best Dogs In The Whole World, and that Mickey is one of those seven.  Their eyes usually go wide and they say: “Really?”  And every time I say that, my eyes go wide too.  Mickey totally is one of the seven Best Dogs In The Whole World, and I love him to pieces, even if he does mercilessly eviscerate every new toy that comes his way, to get at the squeaker.

But Squeakers aside, I just realized that I haven’t actually addressed the question comprising part of the header for this blog: Should you trade in your dog for something else?  As far as I’m concerned you absolutely should, if you’re so inclined.  After all, it’s your dog, not mine.  My dog is staying put, wet fur, eviscerated squeaky toys and all.

If you have your heart set on a trade though, I have some candidate animals in mind.  So this brings us to the other part of the header for this blog: Cryptozoology Part I.

Cryptozoology is “the scientific study of unknown animals about which only circumstantial, or at best insufficient, material evidence is available” according to The Canadian Encyclopedia.

These unknown animals aren’t completely unknown though.  If they were completely unknown, we wouldn’t be studying them because we wouldn’t know about them.  Right?  So let’s just say that cryptozoology  is the study of “Cryptids” or critters that might exist, but we don’t yet have sufficient proof.

So maybe you should put Cryptids on your list of candidate animals.

Cryptids include things like Bigfoot, the Loch Ness Monster, The Toronto Tunnel Monster, The Mongolian Death Worm and any elected official appearing three days in succession within a 500-metre radius of the House of Commons.

Unfortunately, most of the evidence for the existence of Cryptids consists of eyewitness testimonials, tufts of hair, toenail clippings, pocket fluff, grainy/blurry still photos, and short, grainy, blurry video clips.  But if you succeed in nabbing one, and take it home for a pet, you will likely become very famous.  (Keep your day job though.)

Below is a classic example of a Cryptid photo, capturing the mysterious Floating Red Oval of Mischief which has been spotted throughout the swamplands of Florida pretty much since Walt Disney was in diapers. 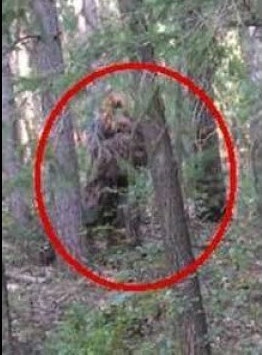 Actually, I lied.  That red oval is actually a red herring (!) and is just there to highlight the indistinct blob in the background.  The indistinct blob could be anything including tree stumps, a large man wearing a deep-sea diving helmet talking to a shorter man with his back to the camera wearing an ill-fitting grey jacket, and a fossilized Member of Parliament.

Clearly, the life of a Cryptozoologist is full of uncertainty.  And frustration.  And bad photographs.

I’m no Cryptozoologist but I do have some very interesting photos and video of my own to show you. They’re going to have to wait though.  It’s getting dark and I need to take Mickey for a walk.  I hear that the Long-Snouted Nocturnal Sloth Badger of Royal Oak may be on the prowl tonight.

Next column: If You Were Going To Trade Your Dog In For Something Else, What Are Your Options?

One thought on “Cryptozoology Part I: Should You Trade In Your Dog For Something Else?”