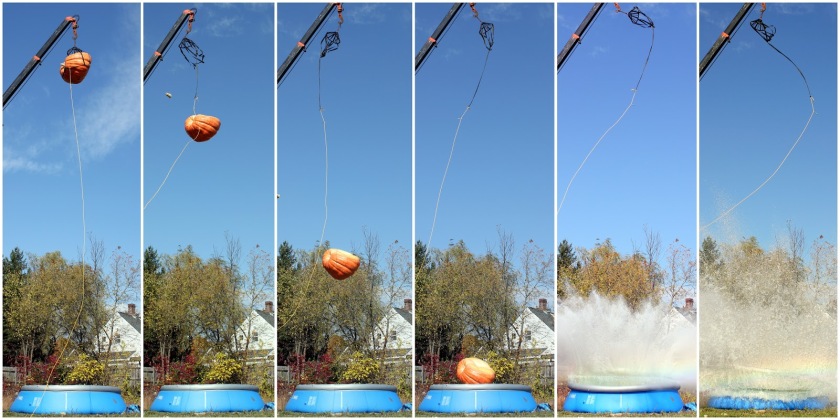 This column is entitled “Even Stranger Things” as you probably already noticed.  Sorry, but I’m just not ready to let go of the whole “post-eclipse-disturbance-in-the Force” thing yet and there are some seriously strange things still going on since August 21st.  I think you need to know about them.

For starters, I’m still doing doubletakes when I see that darned plastic owl that someone stuck on a post outside my office window.  I don’t even know why anyone would do that.  Those things don’t fool anybody. 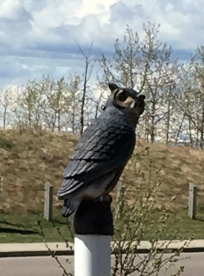 Then there’s this whole Harvest/Thanksgiving-related subculture out there that I just discovered, involving hoisting a massive pumpkin and/or massive squash high in the air with a crane or helicopter and then dropping it into a swimming pool, or on to an old car, or a trampoline, etc.

Helicopter locked and loaded at 25,000 feet

Then there’s this weird thing going on with my shoes. I walked Mickey last Saturday afternoon, checked to see which way he was facing during his potty stop, came in, took off my shoes and said: “What the heck?  My shoes don’t match!”

My first clue was the colour, as I had been labouring under the distinct impression that they were both grey since I bought them a couple of years ago.

The next thing I did was check the size; they both turned out to be size  9 1/2.

Next I conferred with my wife and forensic shoe-expert-in-residence, Jeanette.  She noted that one shoe was subtly longer than the other, the wear patterns didn’t match and also confirmed that the shoes were different colors.  She speculated that maybe I had gotten one of them wet hopping around on one leg in the foot of snow that fell early in October (another strange thing), or had left one of them out in the sun, or carelessly stepped in a puddle of bleach or worse yet, sulfuric acid.

Then I checked the labels more closely and that was the clincher: they (the shoes) weren’t even made in the same country.

You have to admit; this is pretty weird.  It would be like you met identical twins, fell in love with one of them, got married and then a year later you discovered that you had somehow married the wrong twin.  Or maybe the one you didn’t marry agreed to sub in for the one you did marry, but they didn’t tell you about the arrangement.  If you were in my shoes (!) I bet you would probably have the exact same thoughts. But maybe not.

Wait! You can’t be in my shoes because I’m not even in them!  Someone else has one of my shoes!  And I have one of theirs!  Eclipse or no eclipse, how could this have happened?

To get to the bottom of things, I called a buddy of mine whom I’ll refer to as Stephen Harris (not his real name), a retired shoe salesman and former Assistant Superintendent of the Livingstone Range SD No. 68. (Not his actual former occupation.)

This was a supremely logical manoeuvre because:

1). I knew for sure that “Steve” had a pair of light brown Converse my size.

2). We had been together with four other lads from high school in early August for “Geezerfest 2017”.  “Steve” had those brown Converse with him, and I had my trusty grey Converse with me.

3). When we were 17 years old, “Harris” played accomplice to a guy named Brad Mighton who burned a hole in his denim shirt one night at the “my parents are away for the weekend” party I threw.  Steve and Brad proceeded to creep into my bedroom, root around in my closet and swap the damaged shirt for my undamaged shirt, which happened to be identical.  (I didn’t find any of this out until about 30 years later.)  My mother puzzled over that for several weeks after she patched the burned spot and kept asking me how it happened.  And I honestly had no idea.  (Sorry Mom.)

By the way, I swear on Manolo Blahnik’s driver’s license that I’m not making any of this up.

So anyway, like I said, I called former Assistant Superintendent Harris:

Me: “Hey Harris.  Happy Thanksgiving.  Have you noticed anything weird about your Converse lately?”

Me: “Like maybe one is grey and the other one is brown.”

But still, I remained suspicious.

The reason for my persistent suspicion is that Steve only hesitated for maybe 50 milliseconds before answering my question.  Even if he WAS wearing his shoes, he wouldn’t have had time to look down and check to see if they matched.  Try this yourself if you don’t believe me.

I made some other phone calls about the shoes, but I’m not going to tell you about them right now.  And I still have absolutely no clue what happened to my other shoe.  But we’re still on the general theme of strange post-eclipse occurrences and I need to tell you about our recent visitor.

We have been growing potatoes in a pressurized enclosure at the lab recently, more or less just for the heck of it.  One day, Mark Watney aka Matt Damon showed up to check out the crop!  Matt’s looking a little stiff these days, but it’s probably that suit.  But stiffness or no, the fact that he would take the trouble to come up and check us out is pretty unbelievable. Right?

But speaking of not believing me, I do have one teensy confession to make here:  that wasn’t Manolo Blahnik’s driver’s license photo back there.  That was actually a high school yearbook picture of Terry Bradshaw, former QB for the Pittsburgh Steelers.  (four Superbowl championships in six years!)  I don’t know why I used Bradshaw’s picture instead.  Must have been that pesky eclipse.  And that  wasn’t a photo of Stephen Harris either.  That was actually the famous shoe designer Manolo Blahnik.

And speaking of shoe designers, I’ll leave you with one last photo.  I swear this really is a picture of Chuck Taylor, supersalesman for the Converse  shoe company, and also the biological father of the Chuck Taylor All Star basketball shoes.

Chuck Taylor thinking about something.  Probably basketball.  Or maybe shoes.

I think Chuck was also fond of this saying: “Never judge a man until you walk a mile in his shoes.  You’ll be a mile away. And you’ll have his shoes.  Even if they don’t match.”