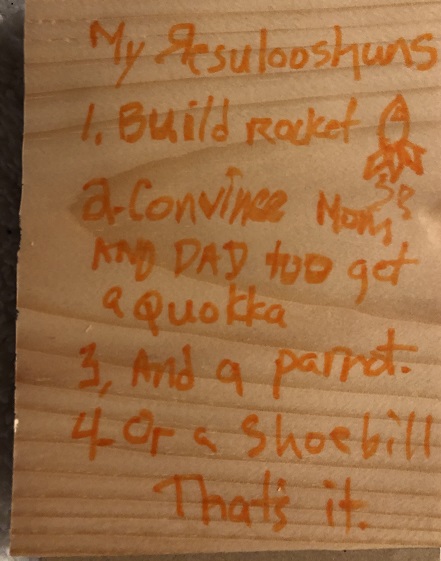 Resolution #1: Stop circling around the unexplained mystery of Russian Nanospirals mentioned in previous posts and just get to the point.

Resolution # 4: Update my ongoing research into the half-life of Girl Guide cookies.

OK! Seems like I have my work cut out for me. And it’s already February 6th. I might as well get started.

Ayn Rand’s real name was Alisa Zinovyevna Rosenbaum. As names go, that’s a bit of a mouthful, so I can’t blame Alisa for changing her name. “Ayn” was born in St. Petersburg in 1905. She studied history at Petrograd State University and became a big fan of Aristotle, Plato, Nietzsche, Nikola Tesla, Howdy Doody and also Capitalism.

In 1926 she moved to New York City, lived with relatives for a few months, then moved to Hollywood despite being freakishly intelligent. Eventually she became even more freakishly intelligent and moved back to New York, invented the philosophy of Objectivism and went on to become a world-famous author, playwright and philosopher. She died in 1982.

Every generation rediscovers her books: Ayn Rand’s Guide to Quokkas, Anthem, Atlas Shrugged, The Fountainhead, We The Living, and also the lesser-known but still-popular: The New York City Intellectual’s Diet. Amphetamines, Cigarettes and Scotch.

Most of the people (and their pets) who rediscover Atlas Shrugged are usually unconscious within seconds of getting into protagonist John Galt’s 80-page soliloquy which starts on page 1873. John’s soliloquy is basically Rand’s treatise on Objectivism. And you thought Hamlet was bad.

Popular Wisdom has it that Ayn Rand initially fled Russia to escape the rise of Communism but that’s only part of the puzzle. I wanted to blame her abandonment of Mother Russia on the weather until I found out that the weather is actually not that bad in St. Petersburg. On average, it’s a hell of a lot warmer in winter than Calgary was this past January, that’s for sure. So much for that theory.

Face-Slapping Contests are a Russian phenomenon in which large Russian men square off and take turns slapping each other. I am not making this up either. It’s not really slapping per se: it’s more like extending your arm straight out from the shoulder to the right (or left) and then rotating that arm at about 5000 radians/sec until it contacts the side of the other person’s cheek/ear/jaw/neck. I think it probably feels a lot like getting slammed repeatedly upside the head by Godzilla or maybe The Hulk. Here’s an example:

THIS is a typical blow being landed in a Russian Face-Slapping contest:

This jovial exchange of blows continues until someone is unconscious. Usually it’s one of the two contestants. The winner receives a copy of Atlas Shrugged, signed by Warren Buffett.

But I feel like the for-sure main reason Ayn Rand left Russia was because of the Quokka. She was quite passionate about these small, adorable marsupials and thought that she would find some in New York City. Sadly, Quokkas are indigenous to Australia. Biology was not Ayn Rand’s strong point.

Moving right along, this whole Russian Nanospirals thing didn’t surface until long after Ayn Rand passed away. But I feel like it could still be relevant to this narrative. Somehow. And no matter what, I’ll still nail Resolution #1 by bringing it up now.

Basically, Geologists in the Ural Mountains are rumored to have found precisely-machined nanospirals made of tungsten and molybdenum embedded in rock strata at least 100,000 years old. Maybe 300,000 years old.

My point here is that these tiny objects were out of place. Some people think that these POOPTARTs (Patently Out Of Place Tiny ARTifacts) are remnants of an advanced-possibly alien-civilization that existed on Earth well before the invention of Exchange-Traded Funds and certainly well before Warren Buffett was born. Physicists now speculate that nanospirals could be used to create surface coatings with unusual properties such as invisibility. I swear on Ayn Rand’s unusual headgear that I am not making this up.

Anyway, where was I? Oh yeah. All this totally makes sense now. Somebody back in 300,000 BC forgot to turn off the cloaking device when they parked their spaceship. Then they couldn’t find the darned thing again. Then there was a landslide. All that was left was a bunch of nanospirals.

A similar thing could happen to the new Tesla pickup trucks except people will intentionally bury them because they (the trucks) are basically hideous if you ask me. So hideous, in fact, that they could cause “actual retinal damage” to quote eminent materials scientist Dave Barry PhD.

Anyway, there’s tons of content posted on line about these pesky nanospirals. Some of the sites have great comments. This is my favorite:

“These guys should be in the Olympics for jumping to conclusions.”

Or maybe for Face-Slapping. Look for it in Beijing, Summer 2022! Along with Ear-Candling.

P.S. Hmmm. Resolution #4. That’s not a bad name for a band, come to think of it. The Rushin’ Nanospirals is also kind of catchy.