For some reason, I want to spend some time today writing about food mashups.  I also want to mention a new form of matter called spin-liquid.  I haven’t quite figured out how I’m going to segue from food mashups to spin liquid yet, but like Roy McAvoy said in Tin Cup: “When a defining moment comes along you define the moment or the moment defines you.”  So here goes…

Alert readers know that a mashup is “a mixture or fusion of disparate elements”.  So for example you could record together a bunch of different music tracks and wind up with something that sounds like five cats, a parrot and a bunch of empty tin cans loose in a dryer set to “De-wrinkle”.

You could build a house mashup by starting with a dwelling for your pet turtle but then keep adding bits on to the original project as you keep trading up to successively larger pets, as outlined in “Why I Built Fallingwater” by Frank Lloyd Wright.

As you can see in the photo below, we have a turtle house grafted on to a duck pen commingled with a rabbit hutch fused to a cat enclosure wedded with a dog kennel.  The nanny goat is trying to convince the boy to become the next occupant but something goes wrong, and instead the goat ends up living in the final structure along with a horse, an elephant (not shown) and a sperm whale (not shown).  Or maybe it was a right whale.  Or maybe I have the right whale but the wrong anecdote.

Anyway, enough of that nonsense.  With the holiday season upon us, it’s time for some other nonsense about food mashups.  I forgot about food mashups for a long time after first learning about the Turducken years ago.  As we all know, the Turducken is a deboned chicken stuffed inside a deboned duck tucked inside a deboned turkey.  Sort of like nesting Russian Dolls that you can eat.  According to one article I read, Turducken were popularized by noted chef Paul Prudhomme.  Note that here I am using Turducken to denote both the singular and plural cases.  I could probably have used Turduckens for the plural case, now that you mention it.

I was astounded (well maybe not that astounded) to find out that this notion of an infinite (well maybe not infinite, but pretty darned long) series of cooked birds nestled inside progressively larger cooked birds extends back through time all the way to the early Romans who, by the way, are also credited with the invention of Tums.

So anyway my point is that of late, I hadn’t been spending a lot of time thinking about food mashups in general or Turducki in particular.  (Or is it Turducken?  Turduckens? I’m still not clear on this point.)  Then I heard about Piecakens, courtesy of noted Toronto chef, Arden Longmuir.

Outwardly, the typical piecaken looks like your basic frosted cake, but if you take the trouble to do a terahertz scan of the thing, you will discover that there are one or more pies sequestered inside the “cake”.  If you don`t have a terahertz scanner you can just cut it open and reach the same conclusion.(A terahertz scanner is that thing at the airport that can show people what you look like in the nude.) 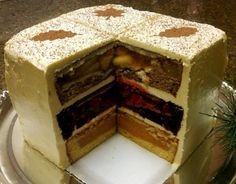 Piecakens usually offer up between 40,000 and 60,000 calories per slice, enough to satisfy the average fully-grown Kraken for several days.  You`ll recall that Krakens are giant sea monsters said to inhabit the coastal waters of Norway and Greenland.

People think that piecakens are a relatively new phenomenon, but like the Turducken, the concept can actually be traced far back in time, zooming past the Romans and going all the way to the early Jurassic Era.     (I may be lying about this last bit, as there were no terahertz scanners in the Jurassic Era.)

Actually, a coffee table book author by the name of Charles Phoenix says that in 2007 he invented a type of piecaken called a cherpumple, which is a mashup of cherry, apple and pumpkin pies.  He’s not sure if he’s the first person to have had the notion to stick a pie inside a cake, but he reckons he is the first person to have made Internet headlines by doing so.  But regardless of their origin, foods like the piecaken and its evil twin sister the cherpumple are everywhere these days.  The piecaken even won a spot on Kelly and Michael just after Thanksgiving 2015; Kelly wisely chewed on a brochure picturing a piecaken, sparing herself 73 extra hours on the treadmill.

But it turns out that for sheer ingenuity, the Inuit of Greenland and Canada are eating the collective lunches of Kelly Ripa, the ancient Romans and all the denizens of the early Jurassic Era, terahertz scanners or no.  But almost no one is eating the lunches of the Inuit when they are serving a traditional winter food called Kiviak.

Kiviak is made by gutting a seal and stuffing the blubber-lined carcass with hundreds of Little Auks (Alle alle), which are tiny starling-sized seabirds (also known as Dovekies).  I swear on Dave Barry`s driver`s license that I am not making any of this up.

The first thing you are probably asking yourself is why don`t the Inuit use Great Auks?  Well Great Auks are too big for one, and secondly there aren’t any Great Auks left because they were all eaten by the Kraken.  (Or is it the Krakens?  I’m still not clear on this point.)

Anyway, the auk-stuffed carcass is sewn up and left to ferment under a pile of rocks for up to 18 months.  Below we are seeing an actual seal carcass, looking a lot like the pod of some kind of large Alien insect, being slit open in readiness for lunch.  I swear on Sigourney Weaver`s driver`s license that I am not making up so much as a single syllable of any of this, either.

According to foodie Marissa Brassfield, the seal’s fat acts as a tenderizer and preservative; this enables people to eat the birds raw, bones and all.  Apparently it is even common practice to bite off the tiny bird’s heads and then suck out the juices, which are chock-full of nutrients.  Kiviak apparently tastes like some kind of ripe cheese and since it is quite pungent, it is eaten outdoors, typically about 500 miles offshore.  Even Krakens won’t touch it with a hundred-foot tentacle.

Kiviak is considered a special treat to celebrate weddings, birthdays, Christmas and other special occasions such as the discovery of spin-liquid, which was announced late this year by physics professor Takashi Imai at McMaster University in Hamilton, Ontario, located about 2900 kM southwest of Nuuk, the capital city of Greenland.

Spin-liquid, existing in theory for more than forty years, was recently confirmed in crystalline matter chilled to -272 °C and subjected to magnetic fields 60,000 times stronger than Earth`s.  Under these conditions the electrons refuse to line up in opposite-spin pairs, and remain in an unresolved, or “liquid” state.  I don`t know about you, but if someone tried to chill me to -272 °C and subject me to a ferocious magnetic field I would probably be a little ornery too.

Currently there are no practical applications for this new material, but I`m going to give it some thought as soon as I finish the last –buuurp-helping of this new food mashup I just dreamed up: strands of red licorice threaded through corn dogs baked in banana peels and garnished with Worcestershire sauce.